The primary open-angle glaucoma is an eye disease, which is the second most common cause of vision loss, according to the World Health Organization (WHO).  This disease affects almost 58 million people in the world, 2 to 5% of the Czech population. A number of research teams are trying to discover drugs that would save eyesight of patients with glaucoma. The Rho kinase inhibitors are the new rising hope in this sphere.

Increased pressure in the eye suppresses the optic nerve. This gradually leads to damage. This nerve is responsible for the transition of information from the retina of the eye to the brain. Its deterioration results in partial or permanent blindness.

To grasp the mechanism of the glaucoma formation it is important to know that the eye is formed by the vitreous humor, a transparent gel-like mass which is covered by a vitreous, the firm protective outer layer. In addition to the vitreous, the spherical shape of the eye depends on the intraocular pressure maintained by the aqueous humor. It simultaneously nourishes the cornea and the lens of the eye. To prevent the increase in pressure inside the eye, the fluid must flow out of the eye freely. It flows from the ciliary body, where the aqueous humor forms, into the posterior eye chamber, which is the space between the lens and iris. Through the iris, it continues to the anterior chamber, bounded by a cornea. The location where the cornea and iris meet is called the drainage angle.

It contains a drainage system where most of the aqueous humor fluid flows out of the eye. Its most important part is a special tissue called the trabecular meshwork. The fluid is absorbed by its trabeculocytes that drain fluid into Schlemm's canal, which directs the fluid into the blood vessels. If the trabecular meshwork is unable to discharge the aqueous humor or the drainage angle is narrowed, pressure in the eye will begin to rise and the optic nerve will be compressed.

Importance of the angle

Glaucoma can be divided into the following types: primary, secondary, and congenital. Primary glaucoma is not preceded by any eye disease and its cause may be unclear. Open-angle glaucoma is much more common. It affects people from 40 years of age, whose intraocular pressure in both eyes increases unobtrusively and gradually damages the optic nerve. All this occurs painlessly and without any other symptoms. In some cases, mild headache or pain at the back of the eye may occur. Loss of vision may not be noticeable initially, because blackout areas in the field of vision are small. Later, blackout areas become larger, peripheral vision starts disappearing

and the subjects in the remaining field of vision are transformed into black shadows and spots. If the optic nerve dies, complete loss of vision will occur. Fortunately, glaucoma can be treated, but treatment must start on time. All degenerative changes of the optic nerve are irreversible. It is therefore very important to attend a preventive eye exam at the ophthalmologist.

Unlike open-angle glaucoma, closed-angle glaucoma happens suddenly. If the front part of the iris is found on the cornea, the drainage angle is closed and the fluid accumulating in the eye causes a rapid increase in intraocular pressure. In addition to severe pain, redness of the eye and seizure-like blurred vision, headache and vomiting may occur. It is necessary to intervene immediately, because the optic nerve is in direct danger.

Secondary glaucoma arises as a result of inflammation or a tumour in the eye, other diseases (typically diabetes) or the application of certain drugs, such as corticosteroids.

The aim of glaucoma treatment is to reduce intraocular pressure to a value that no longer causes damage to the optic nerve. The treatment begins with regular application of eye drops, if it is not successful, eye surgery is the following option.

In the case of primary open-angle glaucoma, a group of drugs called Rho kinase inhibitors is bringing a promising opportunity. They include the substances ripasudil and netarsudil, which directly act on the trabecular meshwork and increase the outflow by Schlemm's canal. Research has found that mechanical oppression is the main, but not the only, cause of loss of nerve cells in the eye. It is believed that the additional effect of Rho kinase inhibitors is linked to the ability to regenerate or restore cells that have undergone degeneration or damage, despite the fact that the ability to restore nerve cells is limited. This is a subject of further research. Nonetheless, Rho kinase inhibitors, either alone or in combination with other substances used to treat glaucoma, can improve the prospects of many glaucoma patients. 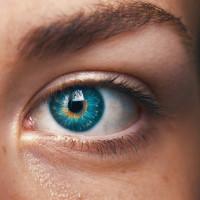